skip to main | skip to sidebar

Well, we all are, by the second in fact. But sometimes it just hits you...the realisation, that is!

Anyway, don't try sticking anything down with Yoohoo...it just doesn't work. I think if you actually use UHU you'll get a better effect, if it's sticking stuff down that your trying to achieve. Yoohoos, meantime, are great for collecting and cuddling...but not for sticking stuff. Though I guess you could put a Yoohoo on the thing you're trying to stick? Not ideal though.

But there you are you see. I'm showing my age becasue I thought UHU was a glue and now it's gone and got a load of friends...Yoohoo and Friends!

They'll be after Swarfega next.

Buzzz
Posted by Bumble at 16:26 No comments:

All the Fun of the Fair

So Spring Fair comes and Spring Fair goes...in a blur of coffee, overpriced sandwiches and aching feet, plus, this year, fancy dress stands and their dolly birds!

Now before I'm accused of being sexist, if such an accusation can be levelled at a honey bee, I am definitely not. In fact when it comes to attractive and scantily clad members of the opposite sex, I would have to say "bring it on!" would be towards the top of my list of responses...normally. However, Spring Fair may teach us all at least one thing and this year having spent 3 days in the halls of wisdom, I have to say that other than the obvious one regarding comfortable footwear, it has taught me that toys and totty simply don't mix.

"For heavens sake, Bumble, why not?" I hear you cry. Well, because it's cheap. Now whilst affordable and inexpensive are similar and yet suggestive of value for money in an item, cheap is just...well, cheap.

After all the hype of the move of Toy Fair back to it's spiritual home of Olympia and the apparently terrific numbers, we had hoped for a trickle down to Spring Fair's Hall 5 where the toys would be awaiting in abundant splendour. They weren't.

Generally speaking Hall 5 was a massive disappointment for more than one reason. The general across-the-board offering was uninspiring and bland. Many of the same old faces were on duty, of course, but with not that much to show for people wanting something different. But perhaps the worst thing was the rash of fancy dress stands that have suddenly appeared...some of which are large enough to have their own gravitational pull! If you stripped out the fancy dress continents, I mean stands, the festive baubles and trees and then the inevitable crystals and candles at the back of the hall...where were the toys??!!

Now in order not to sound like the Mr Reaper of the insect world, not all was doom and gloom. The wooden toys from the lovely people at Melissa & Doug have been taken on board by Bumble as have the cuddly Yoohoo & Friends!

A glimmer of hope in the gloom of Hall 5 which, despite my grumblings, hopefully doesn't reflect the state of play in toys today...

Buzzzz
Posted by Bumble at 05:24 No comments:

So then, it's officially over. The recession that is!

It was with unbridled joy that we greeted the news in the hive that during the busiest retail quarter of the year, Q4 in 2009 saw a growth of an entire 0.1% for the UK. Salvation is upon us.

Toys and perhaps less noticeably gifts, have had a turbulent 12 months or so, as noted by the industry wigs at the 2010 Toy Fair in London. However, the storm has been weathered according to the British Toy and Hobby Association Chairman, Roger Dyson, although the comment that "many suppliers and retailers are stronger than they were a year ago" is upbeat to the extent that I want the drug testers round to his office pronto!

On the ground, so to speak, there is still a heck of a way to go to regain consumer confidence and with it, their spending.

Some small independents will have benefited from the demise of Woolworths in 2009, but there will be no such boost in 2010. With interest rates, the increase in VAT and a general election on the way, expect uncertainty to continue well into the year.

Perhaps we should lobby the government to introduce a toy scrappage scheme for 2010?!

Bumble
Posted by Bumble at 08:25 No comments:

Admittedly the rate at which Bumble's Beelog is posted is probably not following the templates of those successfully blogging their way through the universe...but does frequency matter?

With size apparently, their is little or no debate, however, the frequency issue is another matter altogether. Perhaps quality does indeed prevail over quantity, or perhaps this bee is clutching at straws...

Nonetheless, around 8 months is positively Eagles-like when it comes to releasing new material, but cometh the new year cometh the honey bee.

So what of 2009? Well, if it had been a school report, I suspect it would have been concluded with "could do better". Certainly in terms of business there were periods when it felt like it was actually striving to be as bad as possible...May, September, October to name but a few parts!

At the end of December 2008, the British Retail Consortium's Retail Sales Monitor called for the tin hats to be donned as they showed that like-for-like sales had fallen in seven of the previous eight months and that eighty-five per cent of consumers believed they were feeling the impact of the recession and were reigning in their spending. Yet the view from the bottom of the food chain as 2009 unfolded and collapsed was a distinctly surprising one with those big, hungry pikes swimming about near the surface managing to get as much food into their bellies as they did.

What was it they were feeding on?

In October 2009, the LEGO CEO stated that he hoped to post a 50 per cent global profit growth for the year and that he thought they could "continue this low double-digit growth for the foreseeable future." Several retailers attributed a significant level of their growth was due to increased sales in toys - Argos, for example. More significantly were the sales of toys at John Lewis where, for the week ending 14 November 2009, they announced sales for the week at £65.43 million, a 13.2 per cent increase year-on-year from £57.82 million in 2008! Not to be outdone by itself, by the week-ending December 5th 2009, sales rose 13.8 percent fueled by demand for electronic games and other toys to a record £102.4m in the week, the firm said.

Amid all this spending in what is admittedly a very small snapshot, back in the "real" world, Tesco reported their best Christmas sales in three years, as non-food performance continued to strengthen with improving like-for-like sales, driven by particularly good growth in clothing, electricals and toys.

Perhaps the shift and success for some was down to the collapse and demise of another...Woolworths?

Call me a gloom and doom merchant, but is there anyone who doesn't feel even just a little trepidation at all this? I mean, after all, is life really about convenience? Is it about getting it all done, whatever "it" is, as quickly as possible and before the children throw a wobbly?

There are times when, whilst surveying the battlefield of small-business life, I have to admit to feeling increasingly strongly about not wanting to live in a world where all children wear a £10 disposable school uniform from The English Shopping Co. and where I can still find somewhere to go and spend my hard-earned and actually enjoy the purchasing process and having a person to speak with whilst doing so. Similarly I don't want to feel the concerns at what seem to be an irrepressibly strong tidal pull towards the latter and away from the former.

I'm sure it's just a hormonally strong concoction of age and cantankerousness...or is it? Ever feel like you just want to stop the world and get off...if only for a moment?

Answers on a postcard please...

A Biblical Fuss Over Toys

Thought for the day; what a diverse and interesting world we live in...sometimes.

Occasionally, however, one is left scratching one's antennae at what horrifies some folk of this world.

Now let's take Playmobil toys for example. Those pie faced, smiley little characters have been filling toy boxes the world over for around 32 years and have become one of the most successful toy brands in the world.

Recently, though, they have offended...or at least their use has been interpreted as offensive by the über toy maker! Despite backing from the Pope, Father Markus Bomhard has been ordered to scrap his Playmobil Children's Bible Plan which incorporated scenes from the Bible using Playmobil figures. 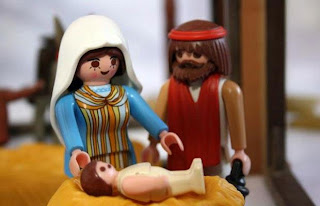 His award winning plan, hatched some 3 years ago, was lauded by Church groups and German-born Pope Benedict XVI even congratulated the priest, writing last November: "May your project make the Holy Bible more approachable for many children as well as adults and grown-ups".

Perhaps rather than be horrified that the "scenes could offend people of other religions", Playmobil should have got on board if for no other reason than the terrific marketing opportunity it represented.

Now they have that anyway...only in the negative.

Bumble
Posted by Bumble at 09:48 No comments:

Spring and the Eternal Hope Therein

Time and it's ability to sweep on by as if we were stood still really is fascinating, even for a humble bee...or should that be a bumble bee?

The reason for this musing is that it has been almost two weeks since I Bumbled my beelog and I really don't know where the time went or, for that matter, what I did. Perhaps my memory and the activities of this period got blown and/or washed away during the worst start to May in West Scotland since records began...or at the very least since May 2008!

Anyway it's a quiet time of year and we've been busy bees working on the book in between periods, but then Easter and the period immediately after always does seem very quiet. I think it will remain quiet until September...

However, hope springs eternal! Apparently with Easter falling in April this year and the summery weather arriving there is optimism for the toy market in the next few months. Personally I'm not sure what difference Easter makes - to anything - and as for the weather...don't make me want to come over there and sting you!

Bumble
Posted by Bumble at 05:25 No comments:

Not a lot of people know that, or perhaps that's a fallacy, whatever that is...

Been quite headachy today; it's probably this rotten weather as bees are sensitive to changes in barometric pressure [okay, I made that one up]...unless, of course, it's you know what?! In fact it's probably just wearing this mask all day that's caused it.

So in amongst all that and my phone dying, just to complicate matters further, the toy world has been positively rocked to it's knees by the horrific news that the owners of Argos, Home Retail, posted a 24 per cent drop in full-year profit in its latest results! Just how they're going to scrape by on profits before tax of a measly £328 million last year, I'll simply never know. They must be besides themselves the poor things.

On a brighter note, the once rock soild [ish] UK car industry seems to have turned the corner with the news of car sales out today, though this best seller may suit a bumble bee more than real people who may possess more "normal" human dimensions...

Bumble
Posted by Bumble at 09:40 No comments: